The history of the museum

The founding of the Schwarzenberg folklore museum: 1913

After moving for the third time in 1928, the museum is now housed in the "Kleberhaus".

In 2007, on the occasion of an exhibition marking the 200th anniversary of the death of Angelika Kauffmann, the entire rear section of the house was reconstructed.

The Dietrich/Untertrifaller team of architects had already been responsible for the development of high tech museum rooms in the historical Kleberhaus, the ancient wing of which, dating back to 1556, was formerly an inn. 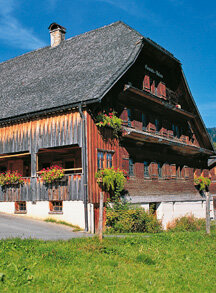