A special kind of cultural event

Finding new venues is part of the tradition of the Schubertiade. Since its founding in Hohenems in 1976, the Schubertiade festival has been held in a number of places, and has thus enjoyed a somewhat nomadic existence.

In addition to the regular concerts in Feldkirch, between 1994 and 2000 a number of so-called “country events” were held, which drew audiences to a number of different beauty spots in the neighbourhood. 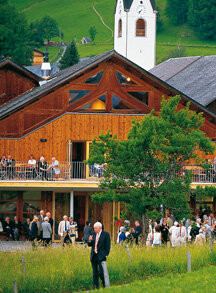 The village of Schwarzenberg in the Bregenzerwald has hosted one of these annual “country events” since 1994. Since the renovation of the Angelika-Kaufmann Hall in 2001, this has been adopted as the Schubertiade Festival’s permanent home.